Who’s Behind this Project?

Foundation? Advisory Board? I thought this was a city project? Where does the Y fit in? What about hockey?

The Community Center project isn’t the work of just a few individuals. It’s also not a typical city project, completely controlled by the city. There are separate groups working on different areas of this project to make the Community Center a success. Here’s an overview: 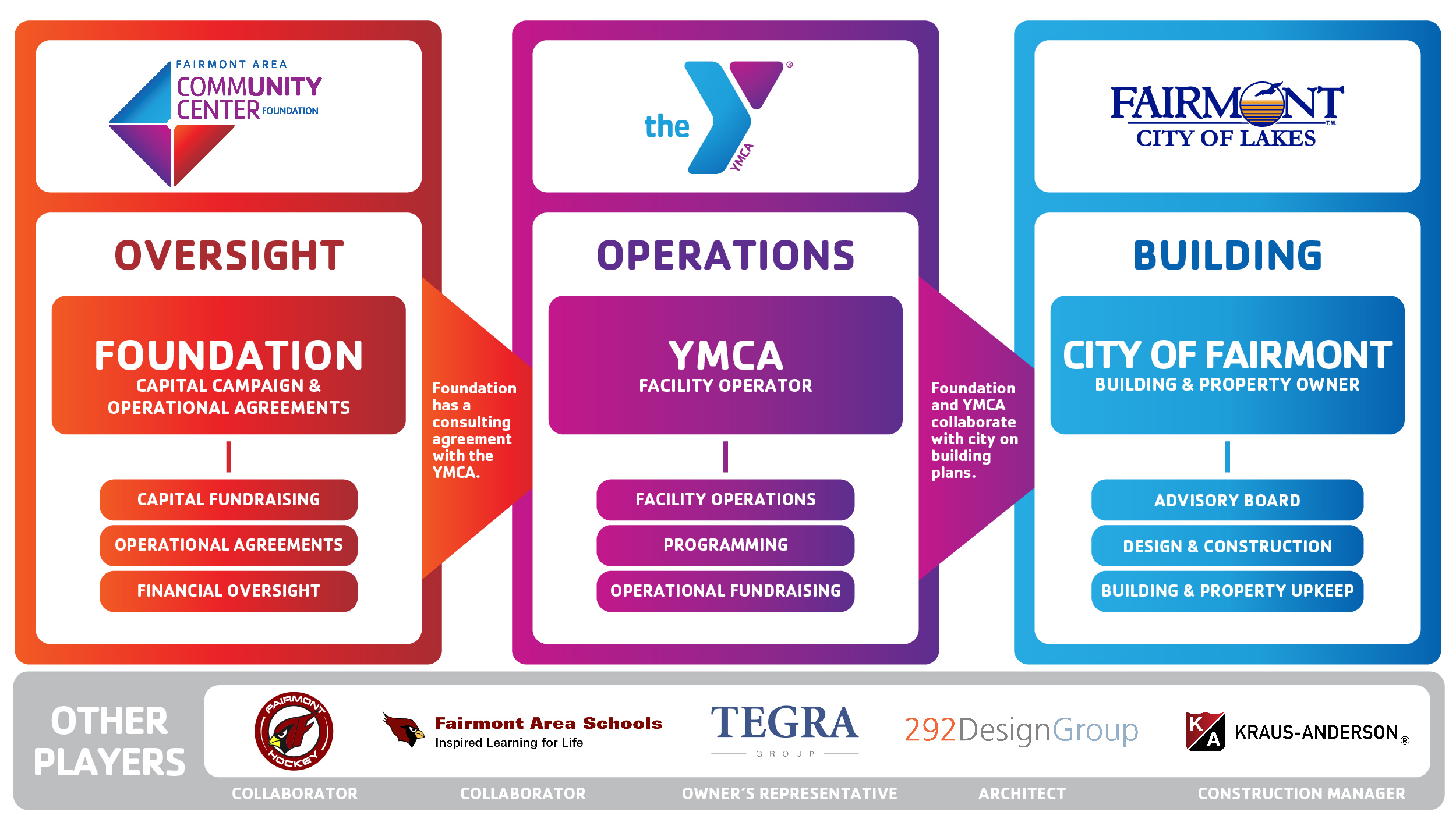 What is the Foundation?

This Foundation is a charitable organization and is the group that will be in charge of raising funds to build the Community Center. It will also be the organization that will oversee the YMCA, or the operator of the facility.

What is the Campaign Committee?

What is the roll of the YMCA?

The YMCA is the planned operator of the Fairmont Area Community Center. On March 15th, the YMCA entered into a consulting agreement with the Fairmont Area Community Center Foundation. The agreement was signed by the Albert Lea YMCA Board as part of an ongoing process to develop a community center in Fairmont. The plan is to work closely with the local Fairmont community to bring programming that meets the needs and wants of the area.

What Roll Does Hockey Play?

Hockey has been collaborating with the YMCA to determine how the ice portion of the facility will be operated. Discussions are ongoing to determined if the YMCA will oversee the entire building or if hockey will operate the ice portion on their own. Research and proformas are still being completed to find the best path forward on this. Whatever the final decision is on this, hockey plays a big roll in the future of the Community Center. As such, they have representatives on both the Campaign Committee and the Advisory Board.

What Roll Does the School Play?

Fairmont Area Schools is fully committed to working together with the city, the YMCA, and adjacent committees throughout this process. As such, they have representation on the Advisory Board and have been included in other stakeholder meetings to provide input. However, they don’t have any final decision-making authority, nor are they financial contributors.

What is the Purpose of the Advisory Board?

The City has established a Community Center Advisory Board. This Board makes recommendations to the City Council on the planning, construction, and funding of a Community Center. This board contains representation from key community stakeholders such as Fairmont School and Hockey in addition to council members. This group decided on hiring decisions, such as Tegra, 292 Design Group and Kraus-Anderson, and then made recommendations to council for approval. This group will partner with the YMCA and Foundation as additional stakeholders during the design process moving forward.

Have a question about the Fairmont Area Community Center? Need clarification on something? Heard something around town you’re not sure about? Send us your question and we’ll get you the correct answer.

Thank You For Visiting!

You have Successfully Subscribed!